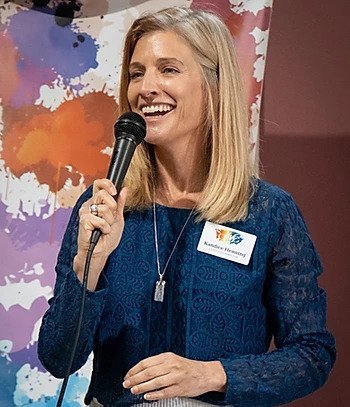 Show Up and Do You

The vision of helping teens become leaders, wasn’t something Kandice Henning of the Alive Center in Naperville, ever imagined doing. But, by listening, and connecting to the voice that nudged her forward, she moved passed her doubt and said yes, even when the idea wasn’t fully formed. In this Vision Story interview, Veraki talked with Kandice Henning, of the non-profit Alive Center, as she reminds us to show up and do you, even when the steps seem unclear.

A Vision Starts with an Idea

In 2013, after decades in the Information Technology field, Henning felt a very different idea forming inside of her. “I’d say it was more of a calling, really. It was an idea that wouldn’t leave me alone.” Henning has a personal practice of meditation, as well as other self-reflection tools, so it didn’t feel strange to listen inward when ideas came forth. “However, if you told me years ago that I’d be running a teen center, I would have laughed,” she said.

The idea was focused around working with high schoolers and sharing all the leadership tools she learned throughout her life. But she didn’t have experience working with teens. Nothing about this loosely constructed vision seemed to fit with the IT world she was so familiar with.

She sat with the idea for a long time, hoping that more clarity would come. But, instead, she was met with resistance by her peers. The lack of support made her doubt herself even more. Maybe it was a crazy thought. Who did she think she was, jumping into an educational field and thinking she could make something work?

One day, during a personal retreat in Guatemala, she received encouragement to say yes to this calling. “I got into a canoe, paddled to the middle of this large lake…sitting there, asking aloud, if I was the right person to do this…and then, I felt this complete calm inside me. That’s when I knew I was ready to say yes.”

She came home, found a space to rent, even though she didn’t have a plan of what would take place in it. She worked hard, tried implementing many programs, and pivoted over and over until her vision became clearer and clearer.

As more teens came together to learn the leadership skills Kandice desired to share, the Alive Center was formed and its mission and vision grew stronger. As a team, they want to be the national leader in Teen-Led and Teen-Driven™️ programming, empowering the youth of today to become the impassioned, resilient leaders of tomorrow; something they are well on their way in doing through their satellite locations and soon to be charter programs.

Stay Emotionally Connected to Your Vision

We asked what keeps her going, even when obstacles like limited resources or even the current pandemic appear. Henning replied, “Failure is not an option. I work hard every day to keep things moving forward.” Though, she’s learned, through trial and error, that giving and receiving are equally important. “When someone offers help, I’ve been learning to say – thank you. I remind myself I am worthy of support from others.”

Her motivation goes beyond her innate driven personality. “I feel this vision has a bigger purpose. The teens who come through the Alive Center are making the world a better place. They are using the leadership skills they’ve learned to help communities, schools, and beyond.”

Show Up for Your Vision

Henning has plenty of great wisdom to share with those wondering how to take action steps towards their vision. “Show up and do your thing. Everyone will have opinions – but just do what you’re called to do. When obstacles show up, and they will, don’t just stare at the wall in front of you. Dig under, get a ladder, find a way around it. Pivot when necessary and allow yourself to flow with the form your vision will develop into.”

If you’re inspired to learn more about their programs, check out The Alive Center www.alivecenter.org or follow them on IG and Facebook @aliveteencenter or Kandice Henning @kandice_henning

The Difference Between Visualization and Meditation

How to Use a Vision Board for a Career Change

Creating the Ultimate Vision Board